A Falcon's eye for power 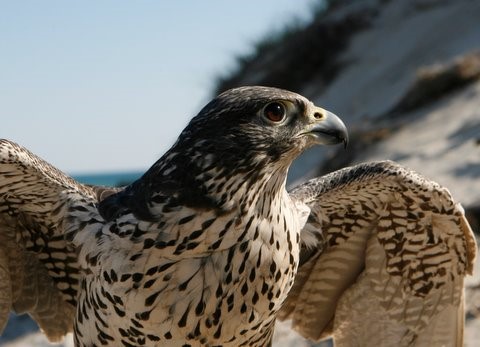 A Falcon's eye for power

No animal has made so much political and historical impact on Denmark as the gyrfalcon. Therefore, Frank Wenzel published a book about the beautiful and highly efficient hunter.

The book "Kongernes Jagtfalke" - The Gyrfalcons of the Kings - is just published and provide a framework for an exhibition at Eagleworld in the spring. And Frank is heavily committed to bring the bird of prey's importance to light again:

- Unfortunately there are very few nature documentaries on the gyrfalcon. It lives an unremarkable life in the wild despite its exciting history and extraordinary physics. I want to arouse interest again.

Take a sneak preview at "Gyrfalcons of the kings" here

Man's tremendous fascination with the gyrfalcon can be traced back to Chinese reports as early as in year 689 BC, and a stone tablet from year 900 BC where a person is standing with a falcon on his hand has been found in Syria.
Besides the gyrfalcon is described as the only bird in "Kongespejlet" - The King's Mirror - from 1220, and a German-Roman Emperor, Frederick the Second, who ruled over most of Europe, admired the gyrfalcon to an extent that he as early as the 13th century published the scientific work "DE ARTE VERNANDI COM AVIBUS": The Art of Hunting with Birds. The book is still hidden under the Vatican in a nuclear secure bunker. And that despite the fact that Frederick the Second was frowned upon by the pope because he spent more time hunting with falcons than to wage war and conquer land. Danish kings had exclusive access to the world's largest and most beautiful gyrfalcons at that time. And yes, they were immensely valuable.

Diplomatic trump
Especially the Greenlandic and Icelandic gyrfalcons have important relations to the Danish monarchy. They are the largest and were considered to be a status symbol more valuable than today's Audi, Gucci and Mercedes - combined. A gyrfalcon was the finest gift you could receive, and the Danish kings understood that they had to protect the value of the precious product: Only the finest nobility from abroad received one as a gift - a so-called "Gift falcon". In fact the gyrfalcon was the only thing Denmark had exclusive rights to, the only thing that other countries' rulers really wanted. In return some relationships and goodwill opened up, which were unique for Denmark, and that the country still enjoy.

Expensive expeditions
The Danish kings' awareness of the gyrfalcon's value was, among other things, expressed through the - by contemporary conditions - very risky and expensive travels, which were ordered to retrieve the falcons in Greenland and Iceland. Ships were equipped by the book, and only the most skilful falconers could choose and take care of the gyrfalcons. The valuable cargo was not to suffer any harm.

A Falcon for Oil
As late as in 1979 Frank saw which diplomatic trump a present falcon could be. There was shortage of gasoline and car-free Sundays, and to appease the falcon interested Saudi king, Frank was presented with the task of giving him an Icelandic gyrfalcon. This opened up some important relations, and later the Danish Queen and Prince Henry visited the king with gifts from Greenland. Moreover Frank had the unique privilege that he was invited to the Saudi king's adventurous falcon chasing three times. Here he was a specialist, falconer and advisor on falcons' health and care.

Frank's polar nights
Frank is more than anyone aware of the gyrfalcon's importance, and he would like to promote it more. He has throughout his lifetime visited the Greenlandic falcon to make new observations. The Greenlandic council shared this interest and provided helicopters and ships to the expert on birds of prey when he was on expeditions in the untouched polar wilderness where the gyrfalcon is the undisputed ruler, where it really can demonstrate its elegant flying skills and brilliant hunting technique. He among other describes the adventurous polar nights in company with the Greenlandic gyrfalcon in his book, which also is illustrated with fabulous pictures that almost can capture the tremendous beauty of nature and the falcon.

The Falcon Will Survive
Frank has recently been in Greenland again to study the white gyrfalcon in its natural habitat. He was concerned that man's hunting was threatening the pantry of the falcon - the bird cliffs on the coast, but luckily this is not the case.

- The falcons have sought further away from the coast where they can't be reached by boat. And luckily the Greenlandic nature is so inaccessible that they and their prey can be at peace here, Frank says.
He also visits the habitats of different falcon species to make a thorough research. Other studies are based on shot down gyrfalcons - and in these cases there are obviously errors when it gets to where the falcon lives and how it behaves alive.
- For instance we don't know how far away the falcon has flown from it's place of origin before it was shot and misjudgements are made, he points out.

What did you say?!
Frank has compared his field studies with observations of the many gyrfalcons at Eagleworld and has among other things found out that the different falcon tribes have different dialects. Just like in the world of humans where people from Southern Jutland and Copenhagen may face problems in understanding each other's intonation and pronunciation, falcons from Iceland, Canada, North- and South Greenland have got their unique sounds. This is quite groundbreaking research, and at the moment Frank is working on spreading it further. Besides Frank has succeeded - as one of the first in the world - to make the falcons breed in human care. Eagleworld also demonstrates the relationship of trust in front of the audience through a falcon training.

Falcon and Human Unites
Former falcon hunts was the ultimate cooperation between falcon and man where they used each other's advantages in a beautiful way to find food. It demanded great trust from the falcon and enormous skills from the falconer. At Eagleworld you can experience a falcon training by horse, and that is quite unique. It is a very difficult task to handle both horse and falcon at the same time - and only a handful of riders can do that.
- It is very dramatic and always arouses cheers and applause when the gyrfalcon comes roaring down from the sky and sits down at the rider's glove, Frank says about one of the great attractions at Eagleworld.
You can read much more about the marvellous history, physics and geographical habitats in the book "Kongernes Jagtfalke" - The Gyrfalcons of the Kings - which can be ordered at Eagleworld and be bought in the bookstore. The book also provides a wide range of images of falcons in all conceivable situations - and points out the differences between gyrfalcons from different geographical areas.

Take a sneak preview at "Gyrfalcons of the kings" here