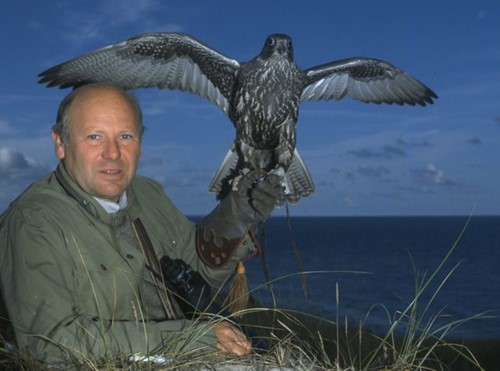 It is not less than 24 years ago, the Icelandic gyrfalcon Sultana was born. And her arrival was just as adventurous as the rest of her long life. She lay turned the wrong way inside the egg and could not pick a hole in the shell. But Frank Wenzel chose to help the little ball of down despite all his experience told him that he would not succeed.

But out came a little vigorous falcon, which Frank nursed for five-six days with vitamins, food and a lot of care. Then he put her back to the falcon mother, who immediately tried to feed her tenderly and lovingly - but it was already too late. Sultana would not accept her mother: She had fallen in love with Frank. In fact she would not accept any other falcon.

The love of the clever fighter was mutual. Frank made an unusual decision to raise the gyrfalcon, even though it was a time consuming job. And he succeeded. Sultana quickly grew to be big and strong, and soon she rushed off between Råbjerg Mile, Skiveren and the beach, where she played a very special game: The scamp gyrfalcon used her impressive flying skills against innocent tourists, as she suddenly dove down to two meters' height and touched their heads at high speed. Frank followed her with his binoculars and was very amused by the terrified jumps the unsuspecting tourists were making.

Sultana's strong connection to humans is especially revealed when there are Indians at Eagleworld. Birds of prey have an enormous impact on the Indians' culture, shamanism and the various healing rituals - and Sultana live up to the Indian's notion about birds of prey's power and magic. When the world famous Indian, Bear Heart, who has written the book "The Wind is My Mother", was visiting Eagleworld, they achieved a very special connection with each other: When he sang an ancient Indian song, she flew over to him as if she understood the words. He was really amazed and was standing with tears in his eyes. It was a complete cohesion and Frank describes it as the most beautiful encounter between man and nature. Later Bear Heart dedicated the song to Sultana.

No Interest for Lovers

Sultana has a unique relationship with humans, but the negative part of the quirky falcons upbringing is that she never has felt connected to her own species. For instance she is not willing to breed with male falcons, but has only gotten babies through artificial insemination. And with each litter she has hatched on her eggs for 36-37 days, but when the babies have appeared, she would not accept them. In the beginning Frank tried hard to make her take care of the babies, but unfortunately it did not help. It was the last straw when Frank had to pick up Sultanas frozen baby from the ground and heat it on his belly skin. The baby survived miraculously and today he is a strong falcon named "Ice Stone". Since that incident Sultans litters have been taken over by other falcon mothers, also the last one, which she got at the high age of 18 years. Gyrfalcons normally stop breeding one or two years earlier.

The lack of interest for its own offspring is in turn replaced by an enormous love for human children. Thousands of children have experienced a true adventure and eyes as large as a plate when they have been asked to sit quietly in a circle. Then Sultana is called upon and lands in the middle of the circle. There she walks around greeting the children, sits on their legs and picks their shoe laces to their huge pleasure. Now when Sultana is old, Frank has chosen not to call on her but waits until she comes on her own initiative. He thinks it's wrong to bully an elderly lady.

Frank thinks that it is important to take care of the elderly - both animals and humans. He ensures that the old lady is activated and gives her a special good diet. So despite her impressive age, Sultana is in excellent shape. The only sign of ageing is her weaker sight on one eye and that she naturally doesn't have the same flying skills as when she was young. Therefore she stays within Eagleworld's safe grounds. But if you suddenly feel strong wings brush your cheek on the beach, it may be one of Sultana's many descendants, who have inherited Sultana's ability to surprise, frighten and fascinate people.