Already at the beginning of the year, we got a surprise in the Eagle World when we heard that our area around Skagen was going to house huge wind farms and solar parks on several hundred hectares. In addition to this, the sea itself at Skagen is in the danger zone of being patched up with 340 meter high wind turbines. Not exactly what you think of when
nature is a hot political potato. Especially when all politicians, ironically enough, are touchingly in agreement to have nature protected and made more attractive for the wild
animals. We hope that science will prevail and that more serious energy sources such as nuclear power will soon enter Denmark. Here we are thinking in particular of the SMR (Small
Modular Reactor) which can help the electrification of the industry in progress. Then nature can have peace. We wrote an colum about this in Denmarks 3 biggetst newspaper

Margrete the First
We eagerly followed the TV series “Margrete the First” on TV2 to see the falconry scenes. We were excited as it seemed like a serious and good story that illustrated the times
in an interesting way. Think -in the 15th century, civilization and culture were at a peak for the three countries Sweden, Norway and Denmark.

A new huge concern for world peace was to turn out to be very close when Russia invaded Ukraine. We decided to send help via a donation to the Red Cross to the most vulnerable
areas where Ukrainians had to flee from the Russians' bombs. We also sent a donation to Animal Protection - which sent rescue teams out to rescue some of the 1000s of animals left
behind in the horrors of war.

This year's preparations
At home in our latitudes, despite the influence of the media from the east, we were busy with the year's preparations and thus training our horses and birds of prey. It was to be seen in
the month of March, when an unprecedentedly large number of sea eagles and golden eagles were migrating through our area. A local pair of sea eagles were also seen. However,

it ended in a direct collision on a day when our sea eagles and the strangers were on the same course. It ended with a regular fight where territory had to be defended. To a large
extent it was. Slightly dazed, our eagles also disappeared in their own directions. It's something we know and often take it in stride for the first 24 hours. However, Vikna, a
mature sea eagle master, was on a longer excursion throughout Vendsyssel. As we were afraid that he would eat some rotten meat or get hurt in some other way - we called for him in
the newspaper and on the radio. An enormous number of North Jutland nature-loving people gave us fresh messages. We found him after a week, approx. 20 km from here, where he
flew to the gauntlet completely as if nothing had happened. Fortunately, he was safe and everyone was happy for the happy ending. Thanks to everyone for the good effort. It is
something that touches us, to know that there is huge support for the Eagle World, even when the whole world is in upheaval.

Our new special program
Later in the year, we got off to a good start with our programs and they are progressing exactly as planned. So now the time had finally arrived for us to launch our new special
program in the condor hall (the Eagle World's new giant hall). The theme is the cooperation between man, horse and bird of prey. This has never before been shown in the Eagle World
in this way. It was Yasmin, our skilled falconer, who demonstrated the skills of our Spanish horses. It was also the dress rehearsal of almost 3 years of waiting due to the shutdowns in
20 and 21. It went well and to the great excitement of the audience. A small dedicated circle could witness the final result here on 10 December. where a special and exclusive program
was presented for a total of 4 hours. This also went beyond expectations. One of the highlights was in the early summer when Mette, our first lady - got the falconry
test at home. It was passed, both a great result but also an interesting and more than 4000- year-old cultural history has been passed on to the next generation. A big day both for Mette,
but also for us, who are happy that the work over 3 years has turned out to have borne fruit. But also that the interest has intensified over time.

A brand new magazine
When we opened the year for our guests, the Eagle World was also ready with a brand new magazine of 40 pages with articles and photos. It was together with Peter's good childhood
friend and now engineer Andreas that the idea for the magazine was born and written. All 1000 copies were snapped up in a few months. Thanks to Andreas and his sweet and
understanding wife Anne for hours of exciting and pleasant telephone meetings where all the contents of the magazine were turned upside down. You can now find the reading material
available for free on our website in our ebook portal. As another climax, after a busy summer holiday with many visitors, the world-renowned
golfer Marc Hammer stopped by with SKY news. A very fine broadcast of almost 4 minutes was transmitted to most of the world with an elegant description of the Eagle World. The very
next day there was a larger number of foreign guests and the attention could be felt in the following weeks.

An eventful trip
In the last months of the year there were, among other things, for an eventful trip in Norway, specifically Stavanger to see the interesting archaeological museum - where the museum
educator is chairman of the Norwegian falconer's association. The visit also offered the cultural gem and attraction: the cathedral. Both parts mainly have a historical falconry
interest for us. To get to the right places - it was with a local sweet companion and tour guide who has in-depth knowledge of the area. We expect to make the trip several times to our
beautiful neighboring country.

December also means renovation of buildings, this year has not been an exception either. A small project has developed into the eagle area and a relatively extensive project is
underway despite the snow and sleet, but helped by carpenter assistance from Hirtshals. 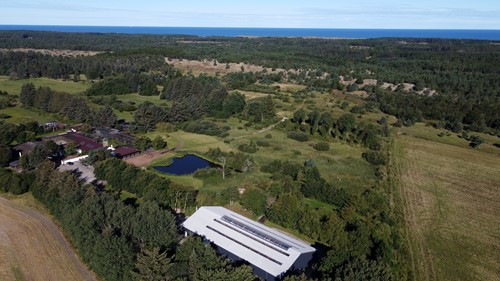